90 Year old Women from Rostov Lights up the World

Miriam has no family; they were all killed in the war, and she never had children. For Miriam, her whole life is the shul, and her ‘family’ is the Jewish community. Despite having witnessed violent pogroms and horrific atrocities during the Holocaust, Miriam expressed her heartfelt feelings when she lit the Chanukah candles. "I listen to the flickering flames whispering Judaism's message to me: no matter how much darkness we face, we can always light a candle and brighten up our world," she said. Imagine her surprise when she found out that her words struck a chord with Jews from every corner of the world, and more than 1,000 people liked her post, shared her story, and commented warmly. One man said he will light Chanukah candles in her honor that night. Miriam is a beloved member of the Rostov Jewish community, and she attended almost all the Chanukah programs in the city. She was present at the large outdoor menorah lighting ceremony; she was a star at the senior’s club party; she took part in the annual Chanukah musical concert with 1,000 other guests and she was the last person to leave! The only activity she was not able to participate in was the Youth Group Chanukah party on ice. This was the best Chanukah that Miriam can remember - enjoying many events, and witnessing the impact her words had on others in distant places. Miriam’s story reminds us that every individual, no matter their age or circumstance, can create positive change in the world.

This post is part of a special project titled "Souls on the Don" which shares the inspiring stories of Jewish residents of Rostov. Follow the project online at: www.Facebook.com/SoulsontheDon

“It was around the time of the First World War,” said Miriam, “when a group of evil bandits came to town. Pogroms were quite common in Zaporozhe, Ukraine during those years. When they entered the synagogue, they found an old, pious-looking man deep in prayer. They grabbed him by his beard and dragged him through the streets of the town.”

“Four days later, he died from the wounds. His family was frightened. They heard that it was easier for Jews to live in Rostov, so they packed their bags and left.”

“The old man was my grandfather, Merel Berel.”

“I lived through some of the darkest times, witnessing firsthand the atrocities of the Holocaust and the oppression of communism. But tonight, as I quietly light the Chanukah candles, I listen to the flickering flames whispering Judaism's message to me: no matter how much darkness we face, we can always light a candle and brighten up our world.” 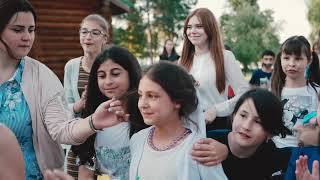 What an Incredible And Inspiring Story